This is a multi-disciplinary guide to support research in the broad field of Middle East and North Africa (MENA) Studies. Topics covered include geography, history, literatures and languages, cultures, immigration and emigration, and diasporic studies 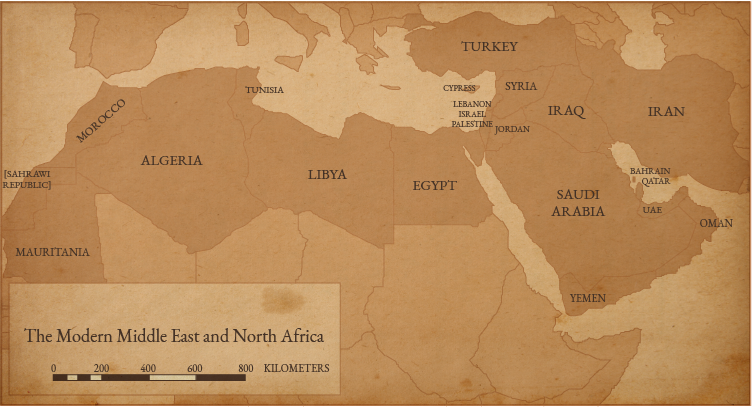 The Middle East and North Africa is now widely recognized as a major geo-political region of the world. Geographers may focus upon the physical environment, climate, and natural resources of the region. They may look to political borders in an effort to define the region, but there will always be transition zones that do not fit nicely with the lines drawn by those with political power. Linguistic, cultural, religious, political systems and ethnic identities vary considerably across the region. For the purpose of this study guide, think of the geo-political region as one comprised by the following modern nation states: Algeria, Bahrain, Cyprus, Egypt, Iran, Iraq, Israel, Jordan, Kuwait, Lebanon, Libya, Mauritania, Morocco, Oman, Qatar, Saudi Arabia, Syria, Tunisia, Turkey, United Arab Emirates, Yemen and the non-sovereign states: Palestine [UN observer state], and Sahrawi Republic in the western Sahara.

For a fulsome discussion on the evolution of the Middle East as a geopolitical concept, consult the monograph below. Terms that were used in the past to describe this region include Near East, and Southwest Asia, Portions of the region are captured in terms that encompass sub-regions such as Arab countries, Arabian Peninsula, and, Persian Gulf.

This guide has been created by the Toronto Metropolitan University Library and is licensed under a Creative Commons Attribution International 4.0 License unless otherwise marked.